LOS ANGELES – CicLAvia concluded its most ambitious year ever yesterday by revealing the results of nearly two years of studies conducted by UCLA and the RAND Corporation examining CicLAvia’s impact in a number of areas. The studies examined the demographics of CicLAvia, the social impact the event has, the public health benefits offered by open streets events, how business benefit from CicLAvia, and the positive changes in air quality with cars removed from the streets for a few hours on a Sunday.

“CicLAvia has a huge impact on Los Angeles life and on city policy,” said Executive Director Romel Pascual. “Already we see the Complete Streets, Mobility 2035 and the Zero Vision plans citing CicLAvia as an influencing factor to restructuring how we deal with urban infrastructure. The studies done in partnership with UCLA and RAND Corporation now take CicLAvia to a quantifiable level with our impact and give policymakers strong data for pursuing additional positive changes in the region.”

The participant study was conducted by UCLA with design input from RAND Corporation and CicLAvia. The goals of the study were to determine geographic location of participants, diversity of participants, reasons for attending CicLAvia, general activity tendencies, attitudes toward open streets events, and indicators for mobility change.

Some of the key findings from the participant survey include:

The study found that CicLAvia participants are diverse, highly local to each route, yet still well traveled from throughout the region, a mixture of families and individuals, and many participants experience CicLAvia for the first time with each new route.

CicLAvia is perceived by some to be a “bike” event, but the studies show participants tend to be “average” Angelenos rather than bicycling devotees. However, the benefits of open streets for Los Angeles transportation infrastructure are widely appreciated, no matter the participant background.

One of the most encouraging data sets from CicLAvia is the influence the event has on public health. While further studies are needed to see if there is a lasting influence on personal health choices based upon an individual’s CicLAvia experience, the impact on CicLAvia day is significant.

As one might expect, air quality improves compared to a typical Sunday when cars are removed from a CicLAvia route. However, the air quality study also found improvements off the route, where vehicles were still allowed to drive.

CicLAvia’s business studies measure the impact CicLAvia has on businesses along the route the day of the event. The studies provide insight into the types of businesses CicLAvia participants frequent during an event, and how those businesses and other businesses can attract the attention of participants. Eventually, CicLAvia would like to obtain funding to learn if customer activity for service businesses (salons, oil change shops, etc.) is shifted to days other than CicLAvia (as we suspect). Additionally, CicLAvia would like to be able to learn about people returning to businesses along a route. There is anecdotal evidence from participants and business owners that participants return to stores they first discovered at CicLAvia, but firm data studies still need to be conducted.

CicLAvia has always seemed like a safe and crime-free event, but a recent UCLA analysis of crime data along routes from 2014, looking up to a quarter mile out from each route, has given firm numbers to back up that assumption.

CicLAvia catalyzes vibrant public spaces, active transportation and good health through car-free streets. CicLAvia engages with people to transform our relationship with our communities and with each other. With the full support of Metro, local governments, Los Angeles Mayor Eric Garcetti, the Los Angeles City Council, Police Department, Fire Department, Department of Transportation, the Department of Water and Power, and the Department of Parks and Recreation, CicLAvia is an innovative model for creating new public space and enriching civic life.   CicLAvia is a 501 (c) 3 nonprofit organization.

The UCLA Fielding School of Public Health, founded in 1961, is dedicated to enhancing the public's health by conducting innovative research, training future leaders and health professionals from diverse backgrounds, translating research into policy and practice, and serving our local communities and the communities of the nation and the world. The school has 650 students from more than 35 nations engaged in carrying out the vision of building healthy futures in greater Los Angeles, California, the nation and the world.

Faculty Referenced by this Article 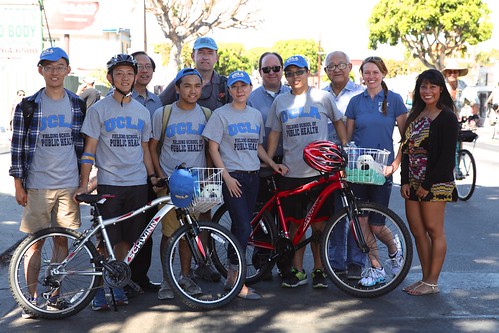